FLUTEWILD! CAMP
July 16 - 19, 2012 in Eau Claire, WI
FluteWild! Camp 2012 was an earth-shattering success.  We "traveled” the world, broadened our world knowledge of flutes, and expanded our playing horizons!  Featured was a special hands-on world flute presentation by local Grammy nominee Peter Phippen. Students were introduced to Irish, Japanese, South American and Indian flutes and flute music.  At the same time, they strengthened skills such as vibrato, articulation, range, tone, rhythm and music theory.  Individual lessons from the camp instructors were included, as well as trying the bass flute, alto flute and piccolos. Our final concert featured music from various contries. 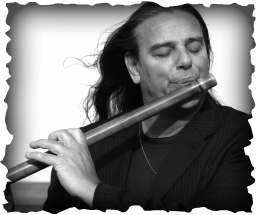 From www.peterphippen.com:
Grammy Award Nominee, Peter Phippen is an innovative performer of flutes of the world.  Since 1993, Phippen has performed concerts, workshops, artist residencies and assembly programs across the United States that are both educational and entertaining - an enchanting mix of the very old and very new in music. He has recorded several albums, and his music has been aired on radio and television worldwide.  We are excited for him to share his talents with us this summer at FluteWild! Camp!  Find out more about Peter and hear his music at www.peterphippen.com.

The International Native American and World Flute Association will hold its 2012 Convention on July 18 - 22 at the University of Wisconsin - Eau Claire.  There will be many amazing soloists and ensembles performing flute music from all over the world, along with classes and workshops.  Numerous vendors will be selling musical items such as world instruments, Native American flutes, CDs, carrying cases, music, music instruction books, and much more.  Visit www.inafa.org for more information.

These were a few fun elements of FluteWild! 2011.  Our theme was Flute Stars: Music From the Stage and Screen. The students had a lot of fun playing flutes, piccolos, alto and bass flutes, working on tone and intonation, learning about the flute in popular culture, how to improvise, how to beatbox on the flute, and experiencing what it's like to play in a masterclass.  They also prepared some really great music and performed it in the annual FluteWild! recital.